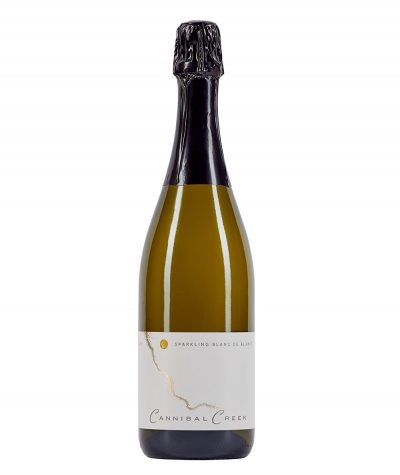 Wine Club Members receive 15% discount off all wine purchases.
Click to join or log into the Cannibal Creek Wine Club

BOUQUET
Fresh and fruity with brioche and yeasty characters

Bud burst was later than expected this season, only seeing the first buds appear in the sauvignon blanc in the beginning of October. It's usually more like the first or second week in September.

We made the decision to fertilize this year for the first time since the establishment stage. We did this because of the two very wet and cold years and the resulting reduced crop loads and shoot growth. It did prove to be a good thing, as the vigour was by no means excessive, with only the one pass to trim the vines being necessary. Extensive infrastructure work was done in the vineyard over this summer with the laying of agricultural drainage pipe on about 30 rows, the average length of each subsoil drain was 50 meters, all of which run into a main drain. This was a big job and should see approximately one acre of vines, which struggle in the wet springs, become productive again. Did seem like a funny thing to be doing when we've had such a dry and hot summer!  We have also renovated the irrigation system and now have it working 100%. We irrigated this year from the end of December onwards and the vineyard maintained a healthy canopy right up to harvest and beyond.

The fruit quality looked exceptional despite a heat wave in the final two weeks before harvesting. We started vintage off on the 22/2/13 picking chardonnay for sparkling base and by the 9/3 we had picked our sauvignon blanc. Over the weekend of the 16th we picked both the chardonnay and pinot noir, a big day processing 17 tonnes of fruit! The merlot and cabernet sauvignon were picked on the 7/4 and were in near perfect condition.

We have trialed two of our favourite yeasts this year in our pinot noir. We hope to gain further understanding of the differences, and it's proving to be very interesting already. We've observed different characteristics such as clarification speeds and distinct fruity characters in one and savoury in the other, it will be interesting to track the differences and compare the two finished wines. The chardonnay fruit was really some of the best I've seen and with next to perfect crop loads of 2 tonne to the acre or a little less in places,  we have a pretty good idea that this will be an excellent vintage for chardonnay. We are very pleased with the new direction we are taking with the sauvignon blanc. We are now barrel fermenting in barrels (puncheons 500L and barriques 228L) and we are already liking the results. We don’t seem to lose any of the fruit and fresh minerally character but gain more complexity and a fuller mouthfeel.

All in all it has been an excellent vintage and we are rating it 8.5/10